You run a full backup to CD or DVD via a desktop icon or daily scheduled job to a new disc each day.

AISBackup is designed to run an incremental backup each time, as this is the most economical method in terms of media usage and time. Unlike some other backup solutions, all of AISBackup's sessions look to the User like a Full backup which makes it very easy to restore the PC to a point when any backup session was run. AISBackup remembers the media where each version of all files is stored and asks you to load the correct media during the restore process.

Some users still prefer to make a full backup each time. If you are running AISBackup from the main interactive interface a full backup can only be initiated after the backup is reset using the Manage Backup /  Reset Backup - Backup Everything menu option. If an individual AISBackup job is run via a desktop shortcut (icon) or a scheduled job then the job may be set to run a full backup each time by checking the Clear Backup Contents File - Backup everything option:

To run the backup just ensure that there is a blank, or previously used RW disc in the drive and AISBackup will run a new full backup to the disc.

This method of running a backup is really only suitable if the Full backup data fits onto one media, which restricts the size of backup to 650-700MB compressed when using CD or 4500MB when using DVD.

Restore of the older backup sessions is a little trickier because AISBackup only remembers the last backup run. To make a older backup available for restore you must 'Import' the Backup Contents File from the pre-used backup disc.

Restoring from an older backup.

AISBackup only remembers the last backup run, so if a Full backup is run to new media each day, the older backups will need to be 're-introduced' to AISBackup prior to restore. This is done by importing the Backup Contents File from the older backup disc.

Normally 'Automated Full Backups' reside on just one media, if you have more than one backup media for the backup then use the last disc for the import process.

Select the Last disc (or other media) used in the backup. 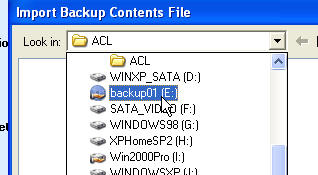 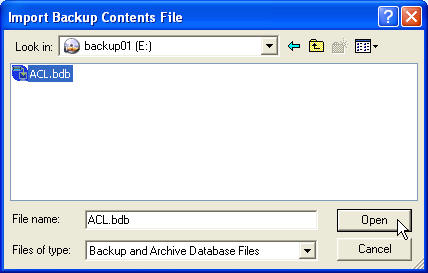 Select No to archive the existing backup.

AISBackup is now ready to restore from a previous version of a full backup.